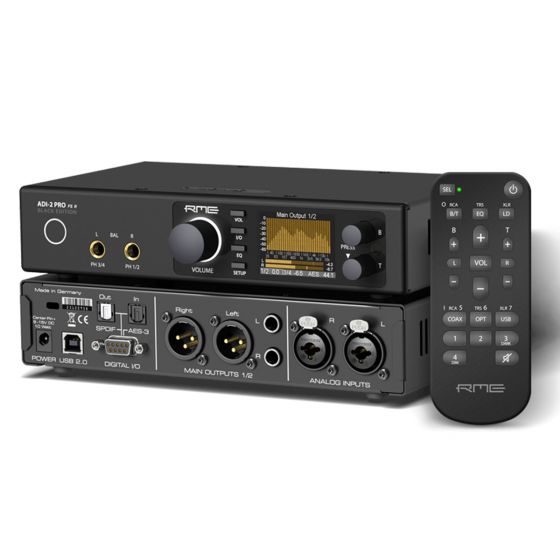 Following the 2020 edition of the Winter NAMM Show in Anaheim, California, RME unveiled its brand-new ADI-2 Pro FS R Black Edition, a revised version of the ultra-high-end AD/DA reference converter ADI-2 Pro FS in a sleek, attractive black finish. Sporting optimised specifications alongside a comprehensive IR remote support, the ADI-2 Pro FS R Black Edition is an unparalleled choice for audiophile Hi-Fi users who choose to use the converter for a primary interface for immaculate, unblemished music and movie audio reproduction.
The ADI-2 Pro FS R Black Edition is one of the most accomplished and adaptable converters on the market today and integrates numerous devices in one single unit; a high-end AD/DA converter with Steady Clock FS Femto-Clock, a dual headphone amplifier, a multi-format converter as well as an AD/DA frontend for audio measurements, mastering and hi-fi applications with upto a staggering 768kHz sampling frequency.

The ADI-2 Pro FS R Black Edition features the AK4493, the very same DAC chip of the RME ADI-2 DAC, this greatly reduces the THD and boosts the signal-to-noise ratio by 3dB during digital-to-analogue conversion. RME’s unmatched circuit design also brings 2.5dB of analogue headroom alongside a digital headroom increase of up to +4dBFS, ensuring that even high intersample peaks do not cause any audible distortion.

Much the same as the ADI-2 DAC, the ADI-2 Pro FS R Black Edition has the versatile and handy IR remote control. This includes RME’s new Multi-Remote control, which seamlessly matches the functionality of both the DAC and Pro. Alongside dedicated buttons for standby, volume, mute, balance, bass/treble, input selection and more, it sports several assignable buttons to allow versatile access to 52 various features and commands. Alternatively, 3rd party controls like the Logitech Harmony series, or any other programmable IR transceivers can also be put to use with the ADI-2 Pro FS R Black Edition.