Out of stock. Contact us for more info.
Estimated Time of Arrival: 2pcs. (no ETA) 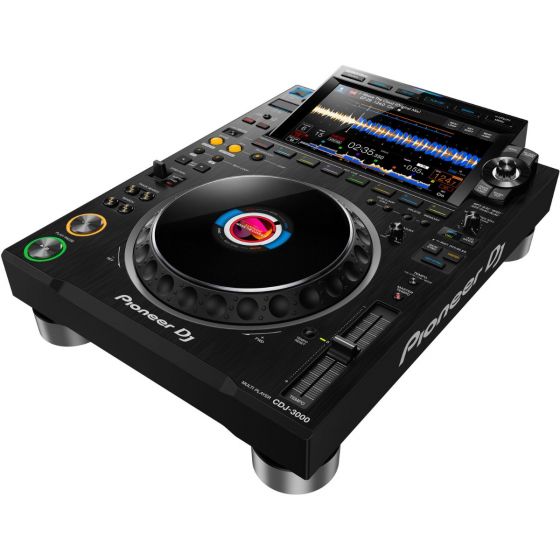 The black Pioneer DJ CDJ-3000 Multiplayer is the latest flagship, pro-level CD/DVD deck that's equipped to play high-resolution (24-bit/96 kHz) audio files from several sources. Several upgrades and enhancements have been made, including a redesign of the audio engine, added MPU processor, 9" touchscreen, Pro Link with Gigabit Ethernet, and a rebuilt performance interface.
The audio engine features an internal audio calculation processor with 96 kHz / 32-bit floating in all playable audio formats, which results in a wide and deep reproduction of the original sound source, even with slight changes in the timbre of the low range. Each component in the DAC has been reviewed and tested, resulting in various improvements that drastically reduce digital noise, allowing for a natural sound that the crowd will want to listen to for long sets at high volume.

The MPU's processing power has been updated with exciting functions and provides a path for more advanced features in the future. The operation system runs faster, smoother, and is more reliable than previous models. A Gigabit Ethernet port provides a wider and faster throughput of information, allowing for up to six players to be connected. The build of the enclosure and components have been upgraded with a high-quality aluminum top plate and redesigned Play, Cue, and Hot Cue buttons. The power cord features a V-Lock, which prevents accidental disconnections.

The 9" touchscreen is 150x brighter than previous models, allowing you to see it clearly in any environment, even in bright sunny days. With a larger touchscreen, the CDJ-3000 affords many advancements, including extra information, short cuts, and buttons for frequently used categories and functions, such as Playlists and Search. Other notable features include Touch Preview, which allows you to touch anywhere in the waveform when browsing, and Touch Cue, which provides access to another part of a track that's currently playing.

The tactile performance controls have been overhauled and include a redesigned jog wheel that's smooth with 1/2 the touch latency of previous models. The embedded LCD screen displays playhead position and artwork for a quick visual reminder of which tracks are loaded. The CDJ-3000 now offers 8 full-sized Hot-Cue buttons underneath the waveform display. With its linear positioning, the buttons feel more natural when selecting cue points according to the position in the track. The dedicated Beat Jump buttons allow you to jump forward and backward from the current play position. You can set the quantize number of beats to a value of 1/2, 1, 2, 4, 8, 16, 32, and 64 beats.

The CDJ-3000 plays rekordbox-analyzed music from USB drives via Export mode, or connect your laptop with USB-HID control to use Link Export or Performance mode. Because the unit is a Hardware Unlock device, you can use Performance mode for free. There is no need for a paid subscription plan, so you can play all the tracks in your rekordbox library, including any from Beatport/Beatsource LINK and SoundCloud Go+ (subscriptions required for streaming services).

You can even connect your iPhone to the CDJ-3000 via a USB cable and mix music directly from the latest iOS version of rekordbox, which now supports lossless file types, including WAV, FLAC, ALAC, and AIFF as well as MP3 and AAC. And you can still stream audio from you iOS device wirelessly to any player that shares the same WiFi connection. The CDJ-3000 ships with a stereo RCA cable, a digital coaxial cable, a Pro Link Ethernet cable, a locking power cord, and a download card for rekordbox DJ.