Out of stock. Contact us for more info.
Notify me when back in stock →
Models / Alternatives
Keys Beats Bass FM Kick Sample 2 Mix Modular Drum Nubass 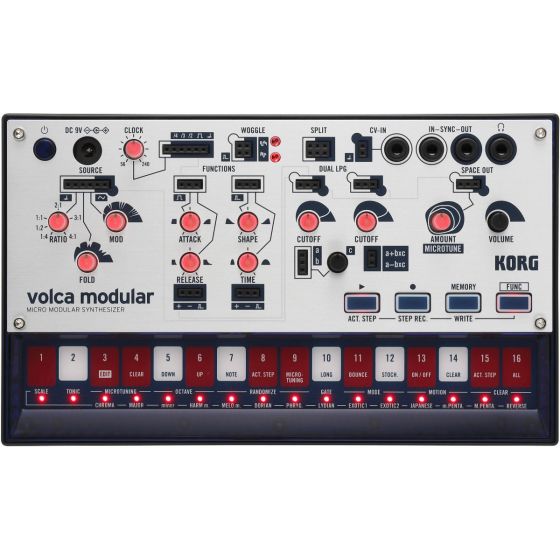 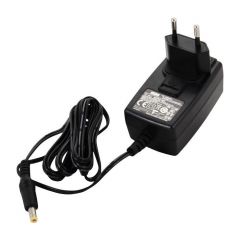 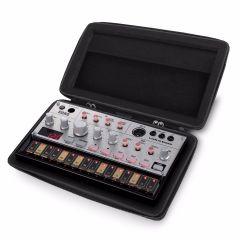 The Korg Volca Modular is a micro-modular analog synthesizer with 8 individual modules designed to harnesses the power of West Coast synthesis to create a wide pallet of sounds and textures, making it well suited for musicians and producers working in the studio or performing live on stage. The machine utilizes a semi-modular approach, so no patch cables are required to make sound. However, the true spirit of this synthesizer lies in the 50 patch points, allowing the user to freely experiment with the signal flow of CV or audio signals.

The Volca Modular utilizes a single part for programming the eight modules in the engine including Source, Functions, Woggle, Split, Dual LPG, Utility, Space Out, and Sequence. The onboard step-sequencer allows the user to manually input up to 16 steps per pattern, but also can be used for real-time recording. The pattern chaining function can chain up to 16 sequences to construct patterns with up to 256 steps. Use the motion sequence function to record knob movements during real-time recording and reproduce them during playback. Additional features and functions include Randomize, which generates accidental ideas, while two added playback modes, Bounce and Stochastic, makes a round trip through the steps or gradually proceeds while randomly moving forward and backward. Also included are advanced musical scales, keys, and micro-tunings. Choose from 14 types of scales including equal temperament. Since you can also specify the tonic key from which these scales start, you can play these scales in any key.

The Volca Modular can be synchronized with other Volcas and Electribes via the Sync I/O. Additionally, the machine features a single TRS-mini CV input, allowing for two CV inputs to control the pitch and other functions from an outside source.

SOURCE
This consists of a triangle VCO carrier and a modulator. The complex overtones generated by FM modulation are sent through a wave folder circuit to add additional overtones, producing a distinctive sound. This module is important in determining the basic character of the sound of volca modular.

FUNCTIONS
This section consists of two function (envelope) generators. In addition to an ADH generator with attack, hold, and release, there's a Rise-Fall generator, also known as a slope generator, which not only applies time-varying change to the sound but also lets you patch the end trigger out back into the trigger in as a loop, making it usable as a VCO or LFO.

WOGGLE
This is a random signal generator containing a sample & hold circuit that uses pink noise as its source. Two outputs are provided, allowing it to output either stepped or smooth random noise.

SPLIT
This module distributes one input to two outputs. It can also be used in the reverse direction, combining two control or audio signals into one.

DUAL LPG
This consists of two low-pass gate circuits. Typical of the West Coast style of synthesis, the module packages a filter with an amp, allowing the brightness and volume of the sound to vary together.

UTILITY
This is a mixing scaling module that combines two signals in various ways. It can mix not only audio signals but also control signals, as well as inverting or attenuating those signals.

SPACE OUT
This is a stereo module that applies a reverb-like effect to the audio signal.

SEQUENCES
This module is for connecting to the internal sequencer. You can set the tempo, and select different rhythm divisions to output via the gate counter.