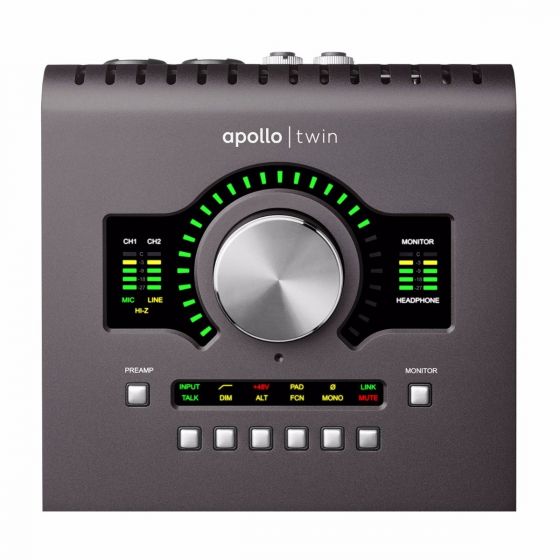 The interface features two XLR-1/4" mic/line combo inputs and a 1/4" Hi-Z input, all with Unison integration for precise UAD emulations of classic analog preamps—impart vintage character of your choosing on microphone and instrument recordings while bypassing the unpredictable nature of old equipment.

Thanks to the switchable low-cut filter, pad, polarity inversion, 48V phantom power, and stereo linking on each analog input, you can efficiently optimize your incoming signals with straightforward buttons on the Apollo Twin MKII DUO's face. In addition to the two primary analog inputs, you can record up to eight more channels by connecting external preamps with ADAT or S/PDIF optical outputs to the TOSLINK optical input port on the Apollo Twin MKII DUO.

The built-in DUO Core processing allows you to monitor and record audio using classic analog emulations with near-zero latency and no burden on your computer's CPU. The plug-in bundle included with the Heritage Edition empowers you with 25 top-notch plug-ins ranging from vintage compressor and EQ collections to virtual guitar/bass amps and time-based processors. The included Console application provides control and recall of all interface and UAD plug-in settings including channel-strip presets, drag-and-drop functionality, and dynamically resizable windows.

The Apollo Twin MKII DUO offers a comprehensive monitor section with talkback functionality and dedicated front-panel controls for Alt Speakers, Dim, and Mono functions, as well as input and output metering capabilities. In addition to the dedicated stereo monitor feed and front-panel headphone output, two 1/4" line outputs are available for connection to a second set of monitors.