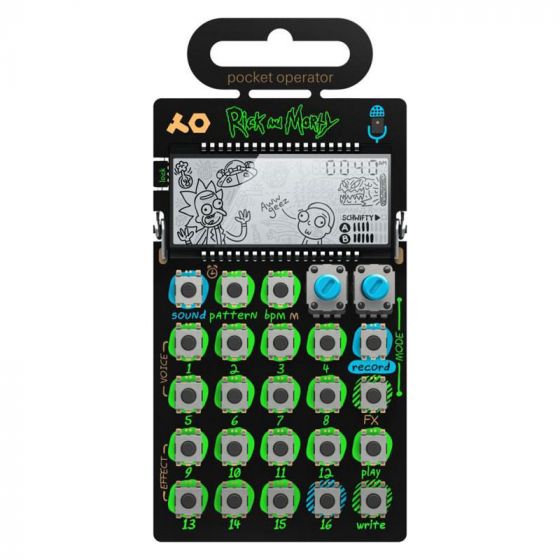 Designed in collaboration with Justin Roiland, the limited-edition Teenage Engineering PO-137 Rick and Morty Pocket Operator Collector Set is a vocal synthesizer and sequencer with a built-in microphone, which offers eight different voice character sampling options, all voiced by Roiland himself. What's more, custom Rick and Morty visuals are provided for each voice. Other features of the operator include animated LCD display, folding stand, 120-seconds sample memory, transpose and change scale functions, plus the ability to replace drum sounds with microtonic sounds (microtonic is sold separately).
Monitor through the built-in speaker or connect the 3.5mm stereo audio output to a mixer or headphones. The audio I/O can also be used for jam syncing multiple Pocket Operators and backing up, restoring, and transferring sound and pattern data. An integrated clock and alarm clock expand the creative possibilities of the instrument, which is powered via two AAA batteries (available separately) for mobile convenience. The PO-137 Rick and Morty Pocket Operator Collector Set includes silicone carrying case with lanyard.